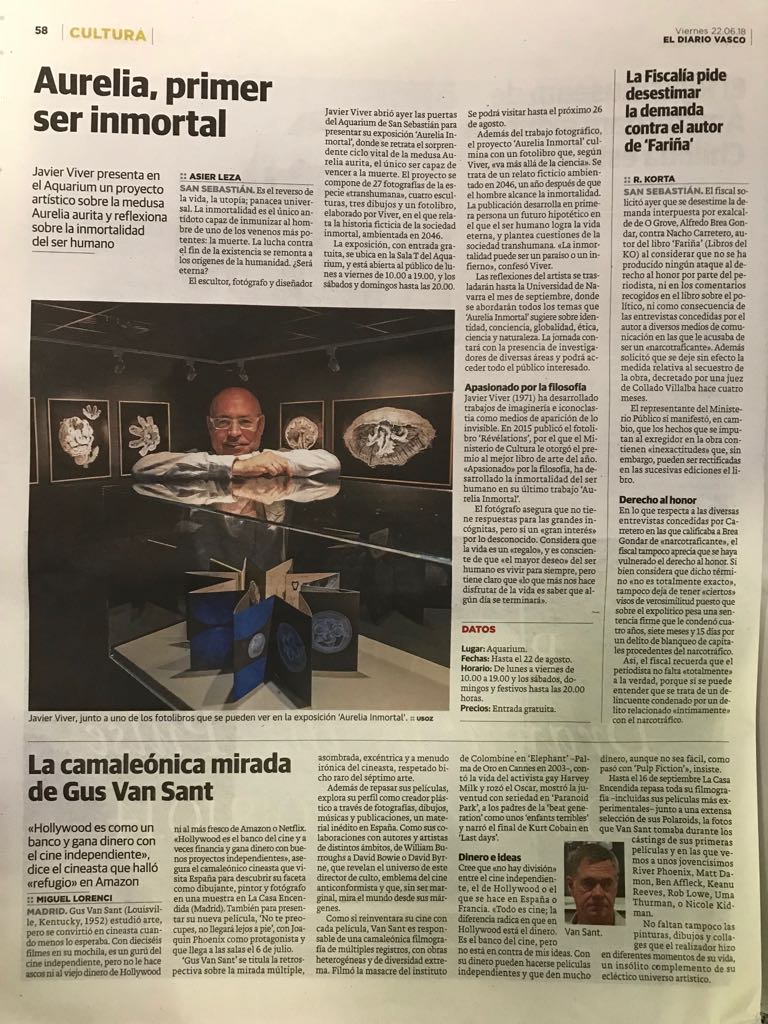 It is the reverse of life, utopia; universal panacea. Immortality is the only antidote capable of immunizing man from one of the most powerful poisons: death. The struggle against the end of existence goes back to the origins of humanity. Will it be eternal?

The sculptor, photographer and designer Javier Viver opened the doors of the San Sebastian Aquarium yesterday to present his exhibition ‘Aurelia Inmortal’, which portrays the amazing life cycle of the Aurelia aurita jellyfish, the only being capable of defeating death. The project is made up of 27 photographs of the “transhuman” species, four sculptures, three drawings and a photo-book, produced by Viver, in which he tells the fictitious story of the immortal society, set in 2046.

The exhibition, with free admission, is located in Room T of the Aquarium, and is open to the public from Monday to Friday from 10:00 to 19:00, and on Saturdays and Sundays until 20:00. It can be visited until 26th August.

In addition to the photographic work, the ‘Aurelia Inmortal’ project culminates with a photobook which, according to Viver, “goes beyond science”. It is a fictional story set in 2046, one year after man reached immortality. The publication develops in first person a hypothetical future in which the human being achieves eternal life, and raises questions about the transhuman society. “Immortality can be a paradise or a hell,” confessed Viver.

The artist’s reflections will be transferred to the University of Navarra in September, where they will address all the themes that ‘Immortal Aurelia’ suggests about identity, conscience, globality, ethics, science and nature. The conference will be attended by researchers from various areas and will be open to the public.

Javier Viver (1971) has developed works of imagery and iconoclasm as means of the appearance of the invisible. In 2015 he published the photobook ‘Révélations’, for which the Ministry of Culture awarded him the prize for the best art book of the year. “Passionate” about philosophy, he has developed the immortality of the human being in his latest work ‘Aurelia Inmortal’.

The photographer assures that he does not have answers for the great unknowns, but he does have a “great interest” in the unknown. He considers life to be a “gift”, and is aware that “the greatest desire” of human beings is to live forever, but he is clear that “what makes us enjoy life the most is knowing that one day it will end”.