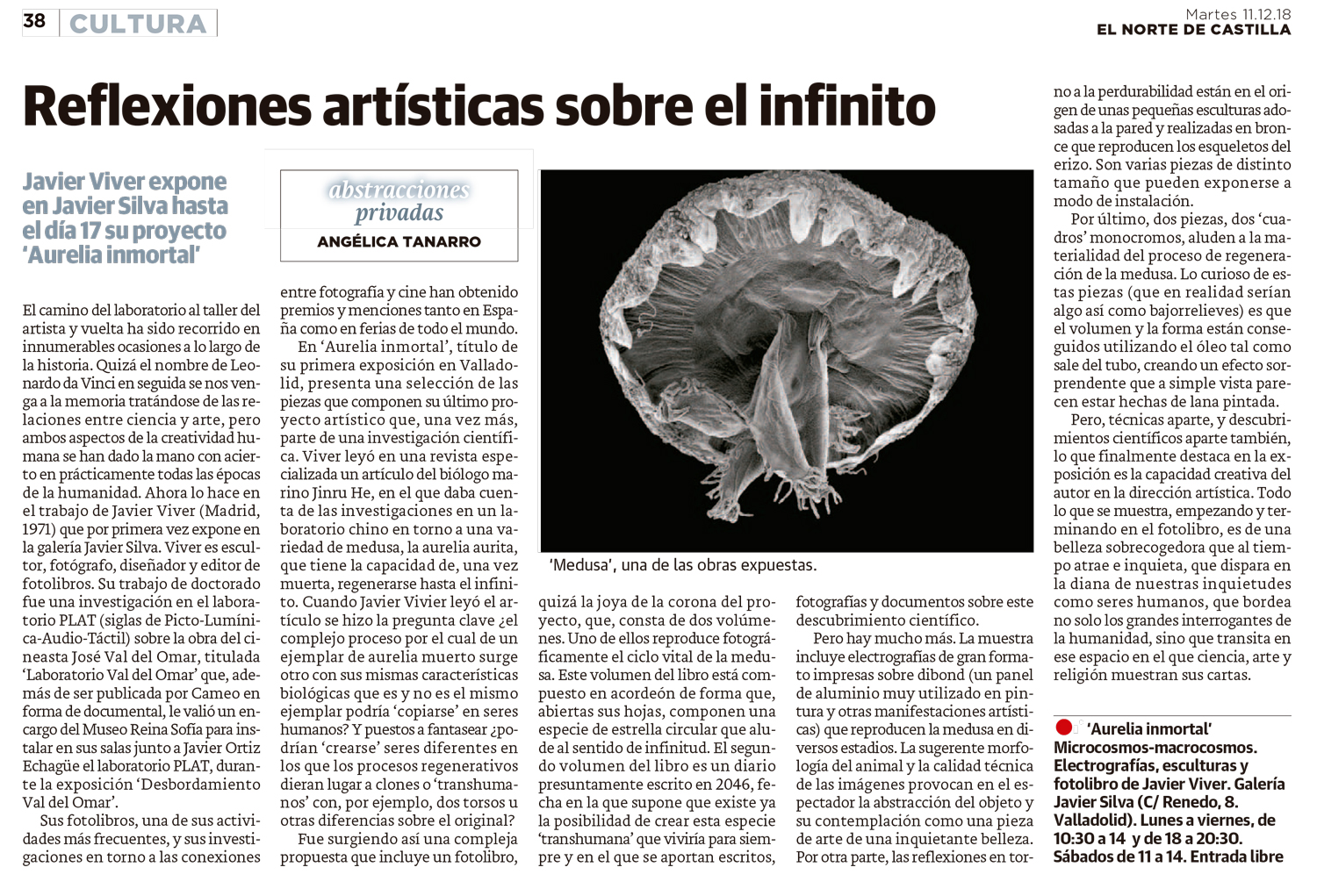 The path from the laboratory to the artist’s workshop and back has been travelled countless times throughout history. The name of Leonardo da Vinci may soon come to mind when it comes to the relationship between science and art, but both aspects of human creativity have been successfully brought together in virtually every age of mankind. Now he does so in the work of Javier Viver (Madrid, 1971), which is being exhibited for the first time at the Javier Silva Gallery. Viver is a sculptor, photographer, designer and editor of photobooks. His doctoral work was an investigation at the PLAT (Picto-Lumínica-Audio-Táctil) laboratory on the work of filmmaker José Val del Omar, entitled ‘Laboratorio Val del Omar’, which, in addition to being published by Cameo in the form of a documentary, earned him a commission from the Reina Sofía Museum to install the PLAT laboratory in its rooms with Javier Ortiz Echagüe, during the ‘Desbordamiento Val del Omar’ exhibition.

His photobooks, one of his most frequent activities, and his research into the connections between photography and film have won prizes and mentions both in Spain and at fairs around the world.
In ‘Aurelia inmortal’, the title of his first exhibition in Valladolid, he presents a selection of the pieces that make up his latest artistic project which, once again, is based on scientific research. Viver read in a specialized magazine an article by marine biologist Jinru He, in which he reported on research in a Chinese laboratory on a variety of jellyfish, the aurelia aurita, which has the capacity, once dead, to regenerate itself to infinity. When Javier Vivier read the article, he asked himself the key question: the complex process by which a dead specimen of aurelia emerges as another with the same biological characteristics, which is and is not the same specimen, could it be “copied” into human beings? And, in a fantasy, could different beings be ‘created’ in which the regenerative processes would give rise to clones or ‘transhumans’ with, for example, two torsos or other differences from the original? This is how a complex proposal emerged, which includes a photobook, perhaps the crown jewel of the project, which consists of two volumes. One of them reproduces photographically the life cycle of the jellyfish. This volume of the book is composed in an accordion so that, when its leaves are opened, they form a kind of circular star that alludes to the sense of infinity. The second volume of the book is a diary supposedly written in 2046, the date on which it is supposed that the possibility of creating this ‘transhuman’ species that would live forever already exists and in which writings, photographs and documents about this scientific discovery are contributed. But there is much more. The exhibition includes large-format electrographies printed on dibond (an aluminium panel widely used in painting and other artistic manifestations) that reproduce the jellyfish in various stages. The suggestive morphology of the animal and the technical quality of the images provoke in the spectator the abstraction of the object and its contemplation as a piece of art of a disturbing beauty. On the other hand, reflections on durability are at the origin of some small sculptures attached to the wall and made of bronze that reproduce the skeletons of the hedgehog. There are several pieces of different sizes that can be exhibited as an installation.
Finally, two pieces, two monochrome ‘paintings’, allude to the materiality of the jellyfish’s regeneration process. The curious thing about these pieces (which would actually be something like bas-reliefs) is that the volume and shape are achieved by using the oil as it comes out of the tube, creating a surprising effect that at first sight seems to be made of painted wool.

But, techniques aside, and scientific discoveries aside as well, what finally stands out in the exhibition is the author’s creative capacity in artistic direction. Everything that is shown, starting and ending in the photobook, is of an overwhelming beauty that at the same time attracts and unsettles, that shoots at the target of our concerns as human beings, that borders not only on the great questions of humanity, but also travels in that space in which science, art and religion show their cards.